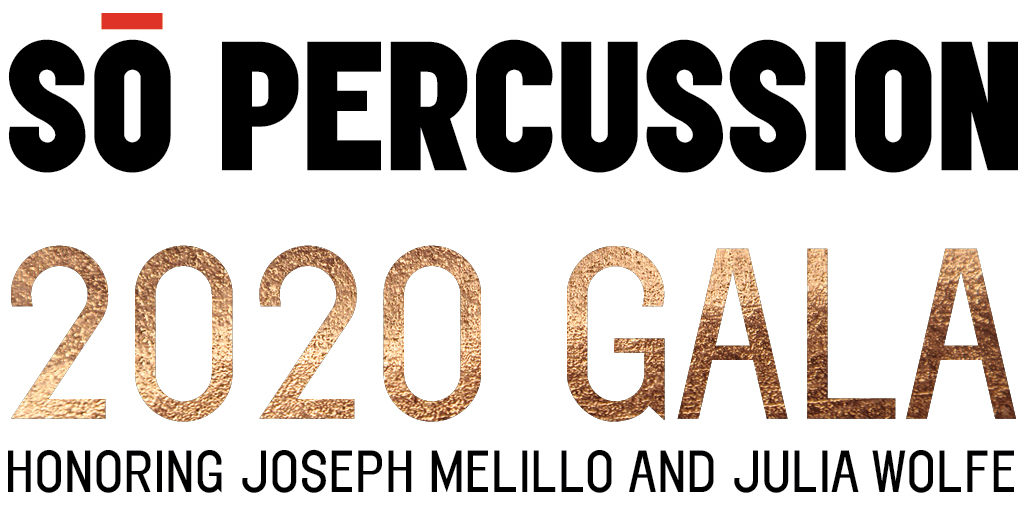 In a normal world (what was that again?), we were so looking forward to celebrating visionary programmer Joseph Melillo and lauded composer Julia Wolfe at Sō Percussion’s gala on April 28. COVID-19 had other plans, but we’re more grateful than ever for collaborators like Joe and Julia who challenge Sō to dream big.

We aren’t alone in this: when we announced them as honorees, everyone from composer/performer Shara Nova to composer Steve Reich wanted to get in on the fun. So we decided to make tribute videos to celebrate their impact on the field. Who says you need a gala to say “thank you”?

In honor of Julia, we’re also releasing a full-length performance video of Julia Wolfe’s “Forbidden Love,” which was co-commissioned for Sō Percussion by Carnegie Hall and the Los Angeles Philharmonic. You can find it next to Julia’s tribute video below. Enjoy!

JOSEPH MELILLO was BAM’s executive producer from 1999 through 2018, where he was responsible for the artistic direction of theater, dance, music, visual art, film, and more at the multi-venue arts center. Prior to that, working with President/Executive Producer Harvey Lichtenstein, Melillo served as BAM’s producing director, following a six-year tenure as founding director of the BAM Next Wave Festival. Over 35 years at BAM, Melillo programmed the work of emerging and established artists such as Pina Bausch, Philip Glass, Trisha Brown, Bill T. Jones/Arnie Zane, Merce Cunningham, Robert Wilson, Urban Bush Women, Ivo van Hove, Ralph Lemon, Anne Bogart, Cheek by Jowl, Reggie Wilson, Mark Morris, and Michelle Dorrance, among many others. His awards include the Medal of Commander of the Ordre des Arts et des Lettres, France (2019) and an OBE (Great Britain). Melillo has served on the US Nominating Committee for the Praemium Imperiale, a global arts prize awarded annually by the Japan Art Association. He was awarded the title of Knight of the National Order of Québec in 2016, and received the 2018 Bessies Presenter Award for Outstanding Curating. Melillo has served as an adjudicator/panelist for award-giving and honorary bodies including the Praemium Imperiale, Japan Art Association; Wexner Prize, Wexner Center for the Arts; Pew Fellowship in the Arts; and the Rolex Mentor and Protégé Arts Initiative.

JULIA WOLFE draws inspiration from folk, classical, and rock genres, bringing a modern sensibility to each while simultaneously tearing down the walls between them. Her music has been heard at venues throughout the world and has been recorded on Cantaloupe Music, Teldec, Point/Universal, Sony Classical, and Argo/Decca. The 2019 world premiere of Fire in my mouth, a large-scale work for orchestra and women’s chorus, by the New York Philharmonic with The Crossing and the Young People’s Chorus of New York City, received extensive acclaim. The work is the third in a series of compositions about the American worker, following 2009’s Steel Hammer; and the 2014 Pulitzer Prize-winning work, Anthracite Fields, a concert-length oratorio for chorus and instruments. In addition to receiving the Pulitzer Prize, Wolfe was a 2016 MacArthur Fellow, she received the 2015 Herb Alpert Award in Music, and was named Musical America’s 2019 Composer of the Year. She is on faculty at the NYU Steinhardt School and is co-founder/co-artistic director of New York’s legendary music collective Bang on a Can. Her music is published by Red Poppy, Ltd. (ASCAP) and is distributed worldwide by Ricordi/Universal Music Classical.

In addition to being a great party, our annual gala is a vital fundraiser within Sō’s season. It enables us to foster new works by composers like Julia through all phases of their creation, from commission to world premiere – and beyond. Gifts of any size make this work possible. Thank you for your continued support and generosity.