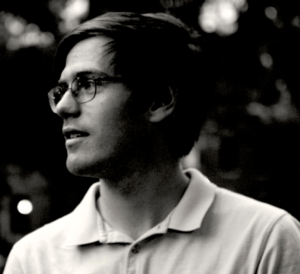 Aaron Edgcomb is a drummer and percussionist whose work appears in
many contexts including improvisational music, new music, noise, and
song. Aaron is very interested in the way music can create and change
social and political identities, and to this end he makes music that
engages with such concepts directly.

Aaron has performed in and composed for many different ensembles
including the electro-rock group Yelsa, his solo drums and electronics
project REA, and the improvising hardcore trio Trigger. He has
collaborated with such artists as John Zorn, Ted Reichman, Anthony
Coleman, The Ladles, and Adam Dunson.

Aaron has performed extensively around the world including
performances at the MoMA PS1, National Sawdust, Roulette, the Museum
of Finae Arts in Boston, the Philharmonie de Paris, the
Elbphilharmonie in Hamburg, the Sarajevo Jazz Festival, the Jazz Em
Agosto Festival in Lisbon, not too mention the uncountable and
invaluable living rooms, garages, basements, and DIY venues that work
so hard to keep creative music alive.

In addition to his work as an improviser, Aaron is trained in concert
percussion and performs solo marimba, vibraphone, and multi-percussion
works. In 2014 Aaron debuted his solo marimba composition “Dawn Has
Appeared” for Ran Blake’s 80th birthday concert at the New England
Conservatory’s Jordan Hall. He also performs in the New Music scene,
and has performed orchestral works with the Reno Philharmonic
Orchestra, and Reno Chamber Orchestra.

In 2014 he completed a B.M. in Jazz and Percussion from the University
of Nevada, Reno, and in 2016 complete his M.M. in Contemporary
Improvisation from the New England Conservatory.

Currently, Aaron is composing new works for solo and ensemble
performance (and occasionally poetry and prose), teaching percussion/
composition/improvisation, and enjoys reading, and fine cuisine (both
eating and cooking it).