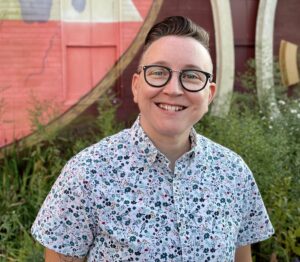 Kelly Watkins (she/they) has forged a diverse path in the arts as a performer, educator, conductor, and administrator. From the stage to the behind-the-scenes action, Kelly is equally at home facilitating success at all levels. In 2022, they joined the staff of the critically acclaimed chamber ensemble Sō Percussion as Director of Operations.

A twenty-year career with the United States Coast Guard Band led Kelly to performing engagements across the United States, Japan, and Taiwan, including musical support for heads of state and many U.S. Presidents. Additionally, over the last decade they developed, organized, and facilitated concert tours for the Coast Guard Band which included performances across 20 states, Puerto Rico, and Taiwan.

From 2013-2016 Kelly served as Artistic Director and Conductor of the Lesbian & Gay Big Apple Corps Symphonic Band in New York City and in 2017 was appointed to the faculty of Eastern Connecticut State University as director of the Eastern Concert Band and instructor of applied conducting. Further engagements from the podium include leading honor bands and collegiate ensembles around the country.

Kelly graduated with a Master of Music degree in Trumpet Performance from Illinois State University and a Bachelor of Music degree in Trumpet Performance from Northwestern State University of Louisiana. They are a past President of the International Women’s Brass Conference, currently serve on the Board of Directors of the Athena Brass Band and as the Connecticut State Chair in the Eastern Division of the College Band Directors National Association.